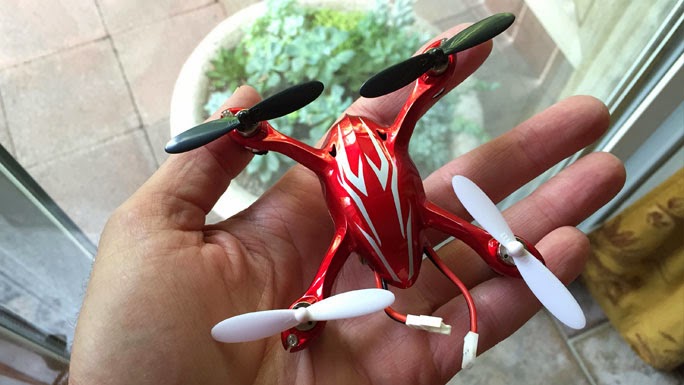 So I got the Hubsan X4 a few days ago as I mentioned here, and I already lost it... it's GONE!

I started off flying it in the house for a few charges, or tried to... it's really hard to control. It's not like the Parrot AR Drone that just hovers in one place if you want it to. It's always moving up or down and/or side to side, keeping you always adjusting for control rather then thinking of paths to take or tricks to do with it.  I decided to take it outside with more room to play with and see if it would be a little easier. It was some what, but then... see what happens in the footage I got.

I was more interested in getting an aerial shot then learning to fly this thing that it ends up roofed fairly quickly.

You would think I would have learned my lesson the first time. Nope! The next day I took it to a school with a very large area to fly in. Again I was more interested in getting a great aerial shot then learning to fly it. I was doing pretty good keeping it above me and keeping it ahead of the wind, that is until I decided to get a 360 view. That is when I started losing control. It was so small in the air that I didn't know which way was forward or reverse anymore. When I tried to adjust, it ended up getting even further away. I panicked! I grounded it hoping to find it but it fell on the other side of some buildings and large trees. It's either in a tree or maybe in someones backyard but I lost it for good!

Maybe I should have bought the Hubsan X4 with NO camera so I wouldn't be so into the low quality videos it takes but how to fly a quadcopter. We'll see...
Posted by George Ogan at 5:41 PM