The very popular Nintendo Wii and Wii fit (or the newer Wii Fit Plus) are my first task under the YFPS (Your FREE Personal Shopper) program (got a better name? I want to here it!). I need to stress, if I uncover a deal that you know is a good deal, jump on it right now, because good deals don’t last long and I want you to get what you’re looking for.

Nintendo just recently dropped it’s price on the Wii to $199.99. It might be a little hard to find a real good deal because of that. The Wii Fit on the other hand, because of the New Wii Fit Plus out, you might be able to pick up the older Wii Fit on the cheap. Let’s see what kind of deals I can uncover.

:D Dell has the Best Deal at the moment for the Nintendo Wii . They have $20 off the retail price at the moment, not sure how long it will last but if you live in an area where you pay no sales TAX, this could be a very good deal. $179.99 with FREE shipping. Limited time offer.

To make it a even hotter deal, you can use Bing.com to get Cash Back, 5% at the moment from Dell. Search for Wii on Bing.com and click “Shopping”, look for www.dell.com/gaming on the side bar.

:D ErwinComp has the Wii Fit Plus for $93.95 Free shipping and NO TAX to most.

G: Amazon also has the Wii Fit Plus for $97.99 Free shipping and NO TAX to most.

:D Costco does have both the Wii and Wii Fit Plus on their website and a few bucks cheaper but you have to pay the tax and they charge shipping and handling so it comes out more. They should have the Wii in stock locally and they might even have a better deal in store but you still have to pay the Tax is what kills it for me but they do have a good warranty, that is why I mention Costco.

Bonus: Since you’re getting a Wii, you might look into this deal for some Wii games. 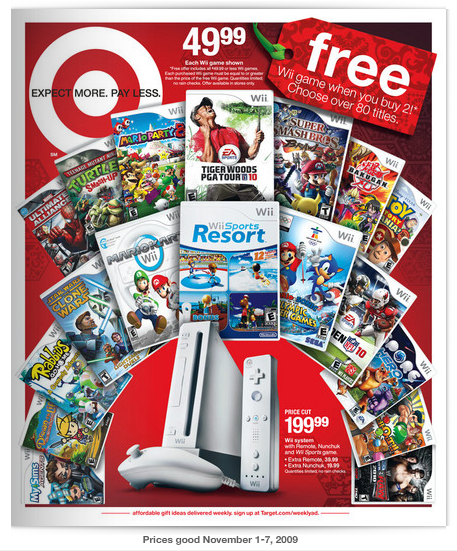 - Free offer includes all $49.99 or less Wii game titles
- Each purchased Wii game must be equal or greater than the price of the free game