Kogi BBQ is no Roach Coach, but it is, but isn’t 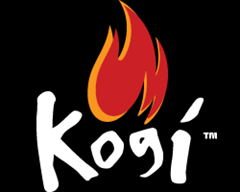 I’m sure everyone has eaten off a roach coach at least once in their lives and probably said to themselves “I’ll never do that again”. Kogi BBQ has changed all that for me.

I gave it a try a little over a week ago thanks to my friend Anthony Gonzales and I’m going back today for more! Anthony first told me about it maybe 6 months ago but I had never heard of it before because they’re mostly in the LA area. Then, I get a text from him letting me know a truck was going to be here, in Costa Mesa of all places. The good news is, they have a new truck that will be servicing the OC. That means Costa Mesa will be seeing Kogi a few times a week and Kogi will be seeing me a few times a month for sure. 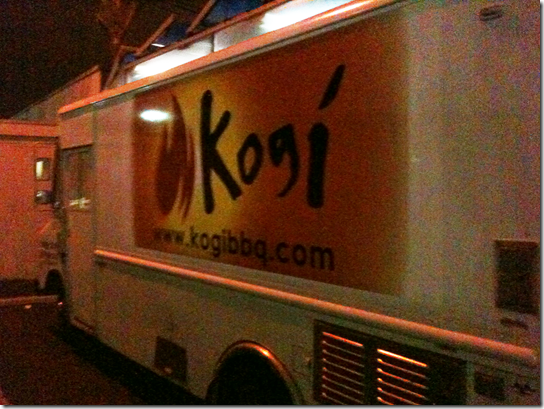 Is Kogi really a roach coach? It is, but it isn’t... The truck they drive is the same style as a normal roach coach you would find parked out in front of a dusty construction site but the food they turn out is better than most restaurants can dream to produce and boy do they attract a crowd. The people in the line below waited for an hour and a half just to get them some of Kogi’s Korean BBQ. (I should mention, the people in line are not in construction.) 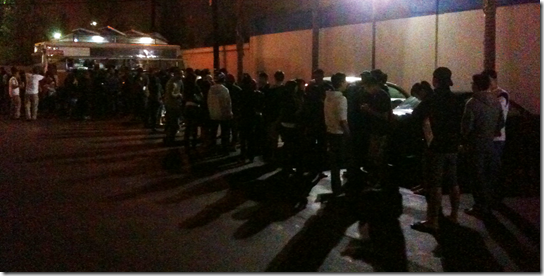 I got there late, about 11:45PM and they had already closed the line (they close at 1 am). Luckily I was able to get someone in line to order for me. I scored, I had my food shortly after 12:00 AM. Below is a picture of what I got last weekend. A Spicy Pork taco, a Korean Short Rib taco and some Korean Sliders (the sliders were taste). 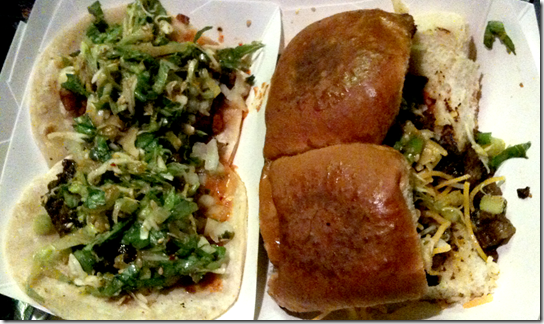 Here’s their menu. It’s a little hard to read, I’ll try to get a better shot today. Better shot taken and uploaded. 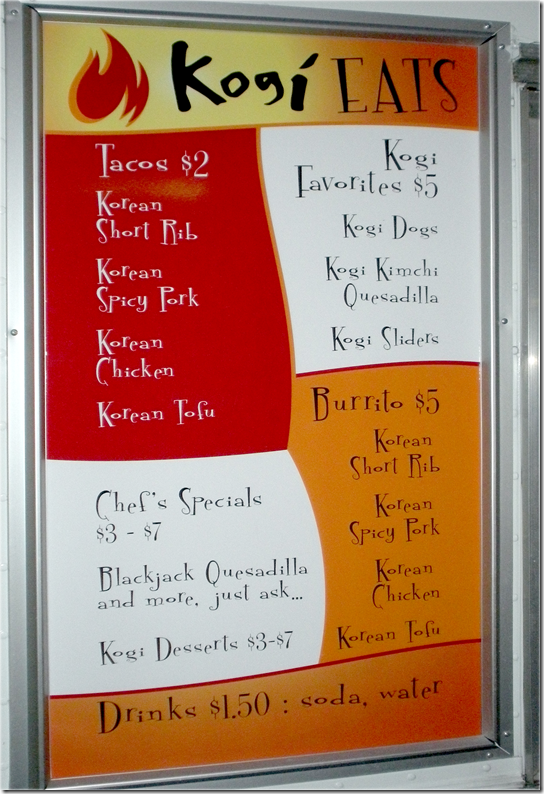 So how do you find out where the Kogi trucks will be and when? They have a website @ “KogiBBQ.com” with their weekly schedule, featured menu and more. They also twitter their location, when they’re on their way, when they’re going to close and anytime they are late. They’re  totally networked!

UPDATE: Tonight, Kogi came through and so did a few friends. I added a few pictures below and replaced the pic of the menu above to a more readable pic. Didn’t get any pics of food this time, I guess too hungry. But, we got some Korean Sliders, a Black Jack Quesadilla, a kids Quesadilla, a few Korean Short Rib Burritos, and I tried the Kogi Feature: Spam-a-Lot Short Rib Burger, Mmmm MMMmm it was good. Maybe next time we’ll see you there! 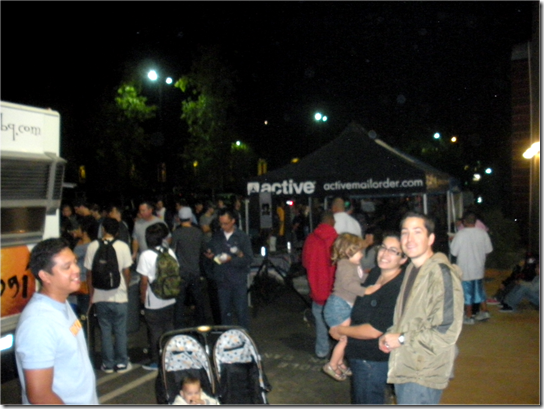